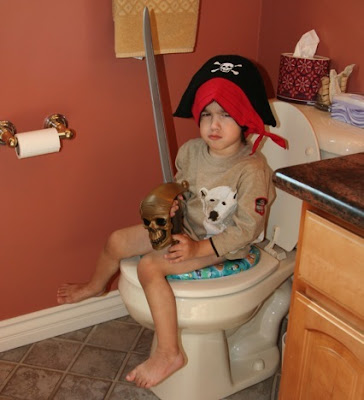 “Don’t be usin’ me potty or I’ll be makin’ ye walk the plank, AARRRRGGGG!”

So hey it’s potty training time again. I held off as long as I could. You know I was really trying to have two in diapers at the same time, as long as I possibly could. More sympathy from others that way. That, and I’m lazy.

Well now it’s time. I do potty training “commando” style. There is no practicing sitting on the potty prior to this. We go from “zero” to “potty-trained” in 5 days or less. Once we start, we don’t leave the house, we don’t do anything else. We started Tuesday and I pumped my normally hyper child full of caffeinated coke (for the diuretic assistance) first thing in the morning. The diapers went off and we went straight to the tighty-whities. And while I scoured the internet and the stores for it, I found that they do not make pirate underwear to fit his tiny size 2 bottom. So he has to settle for some pairs of Shrek and Diego themed underwear. Neither of which he’s thrilled about. He took one look at the Shrek underwear and said, “I don’t like that. If you put that on, I’m going to poop on it so I don’t have to wear it anymore.” Nice, huh? Fortunately he warmed up to the idea of Shrek and has tolerated it just fine. (and no he didn’t poop in it) We’re on day three and so far, no accidents.

Of course my “commando” style potty training means I have to follow him around EVERYWHERE, all day long. I’m constantly looking at his facial expressions and his body language, not to mention we take scheduled trips to the bathroom every 5-7 minutes regardless. Marshall happens to be off this week, which is the only reason why the other kids aren’t being severely neglected this week. So far, Seamus and I have spent most of our time in the bathroom. Talking about life and philosophy and anatomy (now that he has unlimited time to observe certain aspects of his own), asking questions about anatomy like... “Why does it do this, Mama?” Giving him answers like... “Uh, because that’s how God made you. Aim it down! AIM IT DOWN!”. But each time he “goes peeps”, we whoop and hollar, clap, dance and sing about the success of ol’ Captain Shea Beard. He then gets to pick out a hershey’s kiss or a circus peanut. Circus peanuts are solely responsible for potty training Haven, and I believe they will do the same for Seamus. Now if only I can get him to sink the imaginary pirate ship (in the potty) with his “cannon balls”. Haven held “it” in for 6 days when he was being potty trained. We’ll see how long it takes for Seamus. “Come on, Captain Shea Beard, shoot out the cannon balls and sink the pirate ship!!!”
Seems that I have a pirate theme going on lately on my blog. I’m too tired to think of much else these days. Why am I so tired, you ask? Because I keep getting woken up at night by CHICKENS, that’s why. So I suppose it makes me tired and cranky and piratey.