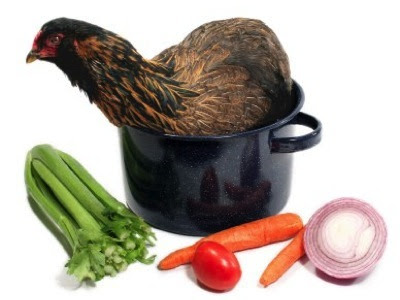 So I know you are all dying for a chicken update. You know, the neighbor’s chickens who keep us up all night? The rooster who cock-a-doodle-doos nonstop?

I spent countless hours on the internet trying to find out the chicken laws for our Los Angeles suburb. I found a website that listed a general law of keeping chickens contained 20 feet from your house and your neighbor’s house. But LA is a big area. I couldn’t find anything about the rules for our specific area. So I did what any kind, considerate neighbor would do. I called Animal Control. The very nice lady who answered the phone explained to me I’d have to come into the office when an officer was there in order to find out the chicken laws for my area. And I’d have to come with our neighbor’s exact address, because literally across the street the chicken laws could be different than they are for our side of the street. I asked if she could have an officer call me back. She took the message, but explained that I probably would not get a call back since they wouldn’t consider “the neighbor has noisy chickens” to be a higher priority than “the neighbor is abusing their animals.”. So I tried to appeal to her... “What about the neighbor chickens abusing me by keeping me up at night???” I asked. No luck. Not getting any sympathy from Animal Control telephone lady. She did tell me the one thing I could do was to make a formal noise complaint. But then we’d have to do it in writing. And then they’d send the neighbor a letter, with a copy of our complaint. And he would have 10 days to comply. And if he didn’t comply with our demands, we’d have to sit down together with a mediator to help work out a solution. And that’s just all kinds of awkward. I really just wanted to make an anonymous call and have the chickens disappear. Is that so much to ask???

I even talked to our neighbor’s other neighbor, to see if the chickens were bothering them too. No luck. Turns out the husband grew up on a farm and the chicken sounds don’t bother him one bit. Also might not bother them since they are older than dirt mature and their hearing is probably not as sensitive as ours. He did say he warned the neighbor that there was a chicken hawk in the neighborhood that has taken down some wild birds in the area. Well that cheered me up. Hey, a girl can dream, right?

Ya might wonder why we didn’t just go to the neighbor and talk to him about his chickens in the first place. Cause we’re scared of him, that’s why. And I’d be lying if I said it had nothing to do with the cultural differences between us, and you know, the general lack of positive Christian-Muslim relations since Abraham’s time and our fear of messing up the general friendliness we have had between us in the past 9 years of being neighbors.

Well I’d finally had enough. Or rather Marshall finally had enough of my complaining. Oh he had been complaining too, but my complaining was decidedly louder and more annoying than his. So Marshall mustered up the courage to go over and talk to our neighbor about his chickens. And he wasn’t home. His son said he’d be back later. Well, about an hour later, our neighbor came to our door. His son told him Marshall came by. When Marshall answered the door, he motioned for Marshall to give him a minute. He was reading my “No Soliciting” sign. And he was laughing. He then told Marshall he loved the sign. Great, he gives us a compliment and we are are about to insult his chickens. But then he brought up the chickens first.

Neighbor: “I know my chickens have been making lots of noise. It’s the rooster that’s the problem.”

Marshall: “Yes, my wife and I haven’t been able to sleep. They keep waking us up.”

Neighbor: “I’m very sorry about that. I’m trying to fix the problem. I’ve been reading about how to keep them quiet and they say if you keep them in a box at night that is so small they can’t raise their head, then they can’t make the loud noises. But he is still making noises even after I put him in the cage. So I built an even smaller cage and am trying that. I also have the cage covered at night. Please just give me two more days to try to find a solution to make him quiet, and if it isn’t working after two days, I’ll give him away. Because you know neighbors come first. I even came over one day to try to talk to you about the chickens but you all weren’t home.”

WHAT? Why does he have to be so gosh darn nice about it all? Well that just knocks the winds out of my sails. Makes it no fun at all to hate his chickens. Here I’ve been complaining at the inconsiderateness of my neighbor, getting chickens that keep us up at night and all the while he’s been researching and building and rebuilding cages to try to keep them quiet. And I’m feeling just a tad bit guilty about daydreaming of taking his chickens out with a high powered rifle.

Well, I don’t know if our neighbor has had success with the smaller cage or if he gave the rooster away. All I can tell you is that I’ve had uninterrupted sleep. Glorious uninterrupted sleep. Every night for the past several nights. The birds are singing, the sun is shining... well, actually, no. It’s been raining nonstop and I haven’t seen the sun in days. But see what good sleep will do for my perception of the world?