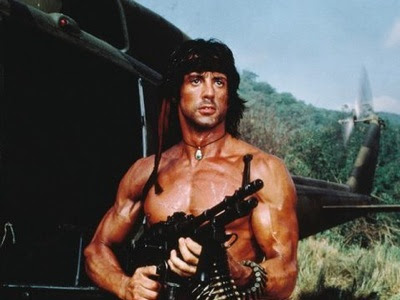 My husband is working on the fourth installment of the above movie. Sly himself is the director. And if you can imagine what 40+ years of steroid abuse can do to someone’s personality, you can guess that he must be a dream to work with. (and by “dream” I mean emotionally unstable egomaniac) Oops, did I just say that? One day he likes what he hears, and literally the next day he will hear the same thing and turn around and start yelling profanities at everyone for messing up the movie. F.Y.I. I’m avoiding the exact name of the movie and director to limit the google-ability of this post and protect my hubby from the wrath of said director. (because I like him and I want to keep him)

So today my mom flew in from out of town. Me and the kids left in plenty of time to get to the airport. As soon as we tried to merge onto the necessary freeway, we hit major traffic. Apparently the on ramp was completely blocked off. I was forced to continue on the other freeway, which was going the wrong direction until the next exit. When I got off, I found myself on a road, in an area, that I have never before been. I figured I could follow the cars in front of me, but half turned left and half turned right. So I turned right. No map, no compass, no GPS system in an area that I don’t know and I have to get to the airport in time to pick up my mom. I decided the only thing I could do was call my husband at work, so he could figure out how to get me to the airport. When he answered the phone, I quickly explained my situation to him.

Hubby: “Which way did you turn off the freeway?”

Hubby: “I think that was the wrong way. Um, but I gotta go. Sorry.”

There BETTER be a good reason for that. (I think to myself)

So I continue driving, trying to stay calm as we enter an industrial area in a bad part of town. I said, “Haven, we’re either going the right way, OR we’re going the wrong way. Maybe I better leave a message on Grandma’s phone telling her to find a nice, comfy seat at the airport when she arrives!”

Then I turned left toward the mountains and then right again. All the sudden Haven (my 7 year old) speaks up. “That’s smart of you to head for the mountains, Mama. Hey Mama, that is a train track! That’s the train track that leads us to the airport! We’re headed south!” (how he knew that about an area he’s never been in, I had NO idea. Then he saw some industrial factory and yelled, “That’s the factory we usually pass on the freeway! We’re headed the right direction!!!” The factory didn’t look familiar to me, but he insisted. Finally we saw a sign for the freeway and we were able to get on. And wouldn’t you know? The very next exit was the exit for the airport. We had actually found our way, and we made it to the baggage claim just in time to meet my mom.

Later I thanked Haven for helping me find my way, and without hesitation and with complete sincerity he replied, “It wasn’t me, it was God! He’s the one who put the thoughts in my head.” And who am I to argue with that? THANK YOU God!!!

So I got a phone call later from my husband, and though it was tempting to answer the phone with an, “AHHH, I’m being robbed in a bad part of town... can’t talk right now.” I behaved myself and answered the phone normally. Apparently today was one of the days Sly was not happy with the mix. And when I called my husband, Sly was staring at him, patiently waiting for him to get off the phone with me so he could start yelling at everyone in the room. And though it’s the time of the month for me and I’m hormonal, I still think my hubby made the wise choice by letting me find my own way to the airport instead of staying on the phone and testing the limits of Sly’s patience. Hormonal wife vs. big man with huge muscles and years of steroid abuse. Wise choice indeed.

On a side note, I remember totally wanting to watch the third movie (that I’m not mentioning but is pictured at the top of the post) in high school. My mom thought it would be too violent for me, so she bought me the book to read instead. Uh mom? The book was FAR more violent than the movie was. Can’t blame her for trying though.
at 8:36 PM