Things That Warm My Heart 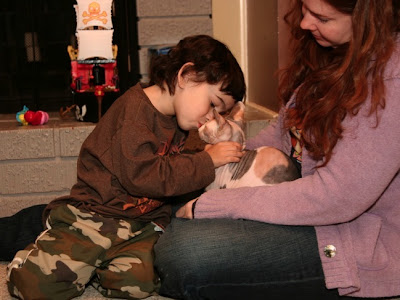 My 3 year old pirate son kissing our naked kitty... is there anything more beautiful?

Well Christmas and the birthdays have come and gone. Our house looks like a toy store threw up in it. Marlie is now 2 and Haven is now 8. I’m not worried one bit about Marlie entering into the “Terrible Two’s”. Probably because she has been in that phase since she hit 13 months. We’re used to the drama. Other than that, we’re very much enjoying her at this age. She’s talking like a 3 year old boy and amazing us every day. If it weren’t for the fact that we adopted her as a baby, we would swear she’s older than two from her cognitive and verbal skills. (though emotionally she’s right on target!) This is the first Christmas where she has received a bunch of “girly” presents. Now she has a couple of dollhouses, tea sets, baby dolls, etc. Interestingly her older brothers enjoy playing with her stuff almost as much as she does. Though when she’s playing “tea” with Seamus, she is drinking tea and he’s drinking “rum” like any self-respecting pirate.

Speaking of Seamus, I think I’m really going to be in trouble when Seamus gets older. Two days ago he was doing something he wasn’t supposed to. I scooped him onto my lap and started talking to him about his behavior. He stared at me with a dreamy look and interrupted me, saying, “Mama, I like you’re eyes!”. Ok, so I was wearing purple glitter eyeliner, but STILL. He is starting to learn the art of flattery. The other day he was sitting on my lap and started playing with my hair. He said, “Mama, you have mermaid hair. I like it.” Pretty soon he’s going to learn how to flash those dimples at me and he’ll be able to get away with anything.

Seamus’ birthmom Alexa came to visit on Thursday and spent the day with us. Always a wonderful day when Miss Alexa comes to visit! The kids were all over her, as usual. (literally) While we were eating dinner and discussing future plans, Haven announced that he wants “at least 4 kids”. Miss Alexa said she wants to have “two kids”. Haven immediately responded, (while pointing at Seamus) “But you already have one!”. Good for him. He gets it. He truly gets it. I baked Alexa a batch of her favorite cookies since that was the last time we would see her before she leaves for college. In fact, she is leaving today (Hawaii!) and we couldn’t be happier for her. We love her and will miss her while she’s gone, but we’re eager to see her again this May when she returns.

One of the sweetest things that was said recently came from Haven. It’s no secret that Haven adores his little sister Marlie and thinks she’s the prettiest little girl ever. He says it all the time. Well Alexa asked him if he was going to marry someone who looked like Marlie. Without hesitation Haven responded, “Oh I hope so!!!”.

Speaking of things that warm my heart... you know what really warms my heart? When people buy my sister’s handmade cards. I’m altruistic that way. Come on, you know you all have ‘Thank You’ cards to write to all those people who gave you gifts this holiday season. She makes the BEST ‘Thank You’ cards. And I’m not just saying that because she promised me a case of Dr. Pepper for endorsing her product on my website. Actually she didn’t, but that might not be a bad way for her to pay me back for the free publicity. I’m just saying.