I Have This Friend... 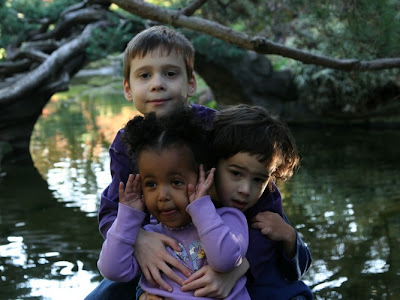 I thought I’d start this entry with another xmas photo reject. Now on other stuff...

I have this friend and we can call her “Bulie”. Her mom is visiting right now. Now “Bulie” and her mother have a little history of differing opinions on say parenting, dressing, eating, drinking, sleeping, furniture placement, world peace.... no, actually they DO agree on world peace. That’s about it. And Bulie’s mom likes to remind her when she thinks Bulie should do things differently. And though not always successful, Bulie tries to let it roll off her shoulders instead of getting angry and talking back. (hey I DID say she’s not always successful) And those darn “time of the month” fairies thought it would be fun to strike Bulie down with the “time of the month” so she would be good and full of hormones throughout the duration of her mother’s visit. And those hormones are making it hard for her to do the shoulder-rolling-off thing.

But the thing is, hand’s down Bulie’s mom is the the most awesome Grandma there ever was. She loves the kids, and I mean she REALLY loves the kids. She cuddles them and kisses them and holds them and gets down on the floor and plays “airplane” with them, and plays games ad-nauseam with them. And just when you think she’s exhausted, the kids ask her to play more. And her answer is always, “Yes”. So in the world of everything that really matters, Bulie would rather accept a whole visit full of, “Don’t you think the bathwater is too hot? Don’t you think she she’ll get cold in that outfit? Don’t you think she needs to drink more water? I would think you’d want to wear something a little dressier than that to your husband’s Christmas party. Don’t you think the kids should wear jackets?” and have a Grandma that is awesome with the kids than have a Grandma that thinks I’m doing a great job parenting but doesn’t like the kids.

Except when it’s the time of the month... and Bulie’s mom starts criticizing her Dr. Pepper intake. And making comments that Bulie is destined to become a diabetic from her Dr. Pepper consumption or ending up with Osteoporosis from all the calcium that the carbonation is sucking out of my her bones. Grandma needs to learn that certain conversations are off limits, especially during Bulie’s time of the month. Don’t mess with the Dr. Pepper.
at 8:32 PM