Pulling Out The Big Guns 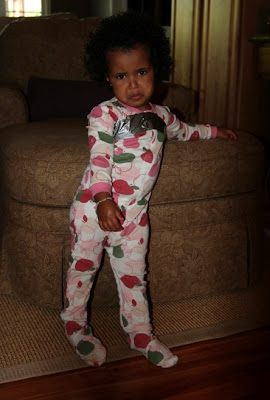 Don’t adjust your screen. My daughter does indeed have duct tape across the top of her jammies. Hang on a minute, I’ll explain....

Skip back to July in 100+ degree weather, where I was forced to start putting my daughter in footed PJ’s for all naps and bedtimes to prevent her from accessing her diaper and finger painting with her poo. My daughter is very “regular”. She goes poo usually once a day and it’s either when she wakes up in the morning or when she wakes up from her nap. She then lies quietly in her crib (so I don’t know she’s awake) and wreaks havoc. Or at least she DID, until I thought of the genius solution of the footed PJ’s. Oh yes, she did not know what to make of those and it stopped her in her tracks... for a while.

It didn’t take me long to realize that I had to omit the couple of pairs of footed PJ’s that had snaps instead of a zipper. Snaps can be pulled open, especially at the waist and the diaper can be accessed. Don’t ask me how I found that out. Please.

Fast forward to about a week ago. I was behind in the laundry and needed to find an extra set of footed PJs to put her in, for her nap. I found one of Seamus’ old pajamas and put it on her. Now, the old version of the footed PJ’s do not have the little flap over the zipper. Not a big deal, right? It would surely take her several tries to figure out the zipper thing and I just needed it to last for that one particular nap until I could do a load of laundry. ha.... ha.... ha..... (I tell myself now) Well, when I walked in her room after that nap I found her standing, naked as a jaybird in her crib. Wearing nothing but a smile. Oh yes. Seamus’ old jammies were on the floor, as was her diaper. Thankfully she had no poo at the time. My silly little Houdini.

This morning when I walked into her room, I found her with the zipper cover still connected, but she had reached UNDER the zipper cover with her crafty little hands and grabbed that zipper, unzipping the PJ’s down to her feet. Oh, and then she promptly removed her diaper.

So now I have her in zippered PJ’s, with a zipper cover AND duct tape on top of the zipper cover. Let’s just see her try to get out of that!!!