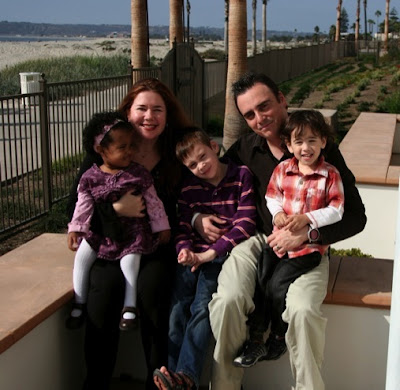 Our fabulous vacation at the Hotel Del Coronado Beach Village on Coronado Island (really a peninsula off the coast of San Diego) continued through the holiday weekend.

We spent Friday at Sea World, Saturday doing the Trolley Tour of San Diego and we checked out Sunday at noon. We tried to cram in as much enjoyment as we could. I spent just about most of our off time on the back patio with the fire pit lit. Didn’t matter what time of day. I loved that I could just flip a switch and the fire would appear.

As you can probably notice in the picture, there is a sidewalk just beyond the security gate, between us and the beach. This was a public sidewalk, and by “public” I mean every single inhabitant on Coronado Island walked through here all day and all evening. And they all turned to stare at us as they walked by. I felt like I was in a display window. Look but don’t touch, people. They were in awe at the seemingly normal people staying in such an exclusive resort. Sometimes they would wave. Sometimes they’d ask if this was part of the Hotel Del Coronado. Sometimes they’d even ask the nightly rate. Do yourself a favor. Don’t ask. Makes the expensive room rates in the main hotel look like chump change. Thankfully for us, we weren’t the ones paying. So I’d say it was definitely worth every penny. Oh and if you’re interested in purchasing one of these beach villas from the Hotel Del, I hear it will cost you 5 million and then you can stay there 100 days out of the year. (the rest of the time the hotel will rent it out to other people)

One evening Marshall was off taking pictures on the beach while the sun going down, and I was sitting on the deck with the fire pit turned on (of course). Some creepy middle aged man walked by on the sidewalk and happened to look up at me, like everyone else did. He stopped, held up his point and shoot camera, focused on me, took a picture and without saying a word he walked off. Uh, I don’t know what that’s about. Weirdo.

We had some fabulous dining in some of the restaurants in the main hotel and we ordered room service a few times. It wasn’t regular room service, mind you. They would roll in the food and set up the dining table for everyone, place settings, food, condiments, etc. And the food was awesome. It was like fine dining in the comfort of your own luxury resort, with the view of the beach and that darn fire pit that I kept running the most of the time we were there. We finally got around to roasting marshmallows. The boys who LOVE marshmallows were finally able to try them roasted over a fire. And they hated them. “Too sticky!!!! I don’t like this!!!!” said Seamus, who will veto any food, craft or toy that is “sticky”. But while I like my marshmallows barely toasted but melty on the inside, Marshall’s mom likes them burnt. And by burnt I mean on fire. And that was the most exciting thing for the kids to see. They kept begging her to do it again and again.

With noon approaching on Sunday, it was time to get ready to leave. I packed as quickly as I could so I could enjoy a few more moments sitting in front of the fire pit, lounging in the chair and staring at the beach (and waving at the commoners who passed by). Just before check-out Marshall’s parents called the bag fairy to come get our bags and pack them in our valeted cars. I turned to Seamus and said, “Say goodbye to the beach house, Seamus.” and he looked up at me and starting crying hard like I had just taken his best toy. I scooped him up and said, “I’m right there with you, man. I feel your pain.” And if it wasn’t socially unacceptable to do so, I probably would have burst into tears with him.

Alas, it was time to return to being commoners again. The valet handed us the keys to our dirty minivan and we drove out of the parking lot. The green ticket that had enabled us to get in and out of the exclusive parking lot throughout the weekend was eaten by the machine as we entered it one last time. That was it... they weren’t letting us come back. Thankfully we had great traffic and only two hours later we were back home. Just before we arrived at the house Marshall turned and said, “Who wants to go home?”. Immediately there was a chorus of “Me!!!!” from the back seat (and the front seat) and then I asked, “Who wants to go back to the beach house?” There was a pause and then then everyone yelled, “ME!!!!!!”.
at 11:53 PM