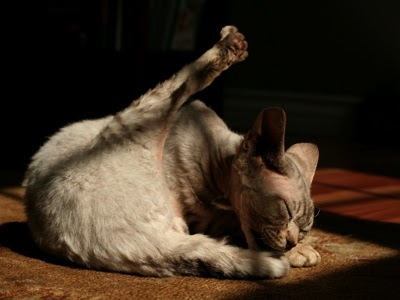 Remember my kitty with the health problems? Yeah well today I gave him away. In August he got really sick. After $1000 worth of tests and medication, we received a diagnosis from our vet. He has stomatitis due to a poor immune system, which is a result of bad genetics. (bad breeder) Stomatitis is an inflammation of his mouth which makes it painful for him to eat. The vet thinks he will eventually need his teeth to be removed. She says he will have ongoing health problems for the rest of his life. The good news is that with medical treatment, he can probably live a long (and expensive) life. He just turned two years old. He could easily live another 13-15 years.

So feeling overwhelmed with a kitty who will have high maintenance medical needs for the rest of his life in addition to raising three kids and homeschooling, we decided to kick him to the curb find him a new loving home. Oh, and did I mention that since we got him, he has had a lovely talent for stepping in his poo before exiting the litter box? (and then proceeds to track his poo through the house) At first I thought it was because he was a kitten and that eventually he would outgrow this talent. But he managed to hang on to this lovely talent upon entering adulthood, which meant he was largely restricted to the laundry room when I didn’t have time to bathe him.

So we gave him to a lady who runs a cat rescue for kitties with health problems. She’s prepared to deal with his health needs and perhaps she doesn’t mind his stepping-in-poo habit.

So I’m a bad, bad mom for giving one of my kitties away. Especially as an adoptive mom, I’m sending the message to my kids that if they get too sick or too expensive, or step in their own poo and track it through the house, I might just find a new home for them too. Yeah sure we are a forever family as long as they don’t do any of those things.