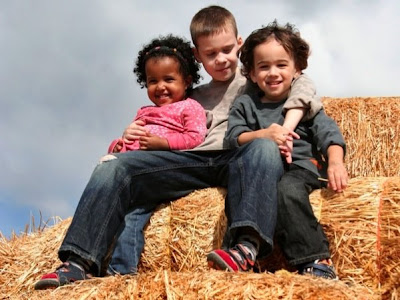 On Saturday we went to the pumpkin patch at a local family farm. They had pony rides, mining for gemstones/fossils, hay rides, moon bouncers, a big corn maze, a petting zoo and more! We started with the mining. We purchased two bags for mining. One had gemstones and the other one had fossils. The mining attendant cut open the first bag and poured it into the sifter. Then we dipped the sifter into the water and shook it from side to side so the water could wash away the dirt, leaving the gemstones. We then picked out all the gemstones and put them in our take home bag. The boys enjoyed it so much that we decided to do it again, this time with a bag of fossils. Haven was so excited to find a huge Indian arrowhead after we pulled the sifter out of the water. The rectangle shaped residue on the back of the arrowhead looked suspiciously like the remnants of a former price tag. Hmmmm. I think I know why. The brochure that came with our bag of fossil dirt says that the fossils are 15 thousand to 340 million years old. I bet an old Indian was trying to sell the arrowhead in a shop 30 thousand years ago, and when it didn’t sell, he threw it away. Thousands of years later, after several layers of dirt had covered the ground, it was discovered in a local mine. Yep, I think that’s what happened. Anyway, we had a lot of fun “mining”. Later Haven came up to me and said, “Mama, I just want you to know that I’m proud of you for doing such a great job helping us find gemstones. You were looking so closely and you found a bunch of things that we didn’t see. I just wanted you to know that I’m proud of you.” He was so serious when he was telling me that. So cute! Anyway, we did find a bunch of pretty gemstones and some really cool fossils and shark teeth in our mining bags. The boys have kept them out on the kitchen table and have been studying them ever since. Doesn’t really make eating at the kitchen table very appetizing.

We then went to the pony rides. Seamus and Marlie each rode a pony. It was their first time. They were very small ponies, so Haven was too big to ride them. I’m not sure if Marlie enjoyed it or was freaked out about it. We couldn’t get her to smile for a picture until the end, and she seemed one second away from flipping out the whole time. Seamus, on the other hand, had the time of his life! He had a huge smile on his face the entire time. After we got home, I asked him if he enjoyed riding the pony. He said, “Yes, but next time I’m going to tell the guy, ‘Faster! Faster!’.”

The kids also had a blast with the hay ride, the corn maze, the piles of hay to climb, sno cones, etc. Before we left, we let the kids pick out a big pumpkin that we will carve for Halloween. On the way out, we saw the produce stand of fresh produce that was grown on the farm. I saw the onions, bell peppers, jalapenos, parsley, etc. and I was inspired to cook a big meal. So I loaded up the basket with fresh produce and went home and made etouffee. I’m not southern (Orlando is NOT part of the south, people), but my southern former sister-in-law taught me how to make it years ago. It was fantastic. Marshall said it was the best etouffee I ever made and Marlie and Seamus ate it up in record time. After some threats encouragement, Haven ate his up too.

It was a great day. Check out the “Pumpkin Patch” link at the top of the page if you want to see our pictures.
at 5:31 PM