Marshall's Idea Of A Party 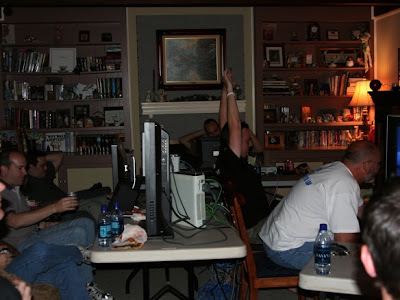 Today is Marshall’s birthday, but his birthday party was yesterday. Despite receiving from me a cookie bouquet and a new 16 GB iPod Touch, all he really wanted for his birthday was to recreate the surprise birthday party I threw for him for his 30th birthday. Except of course this time it wasn’t a surprise.

Two years ago, I threw him a surprise birthday party that was actually a Halo 2 LAN party. For all you non-techies out there, that means a bunch of guys get together, each bringing their own Xbox and TV monitor. Then they use a bunch of cables, connecting all the boxes and TVs together to create their own Halo game to play in. (usually for hours and hours) Now it was a Halo 3 LAN party. This year was better because I didn’t have to plan it all behind Marshall’s back. He invited the guys, he borrowed the tables and chairs from the neighbor and he set up the room. All I had to do was order/pick up the food and cake. Oh, and keep the kids out of their hair. I brought some books and movies into the master bedroom, so I could keep the kids locked up entertained in there. I let them out at various times when the guys were taking breaks so they could marvel at the cuteness without the kids being around long enough to annoy them. Seen but not heard, right?

Toward the end of the evening, I set up the big comfy pillows against the headboard of our bed and all four of us sat against them, watching a movie. Marlie was sitting on my lap, so I could keep her contained. The minute either of the boys tried to crawl forward on the bed toward the footboard, I would firmly say, “Lay against the headboard or I’ll make you get off the bed.” That was enough to scare the kids into compliance. They knew the comfiest place to be was the bed, so they did not want to get banished to the floor. Sounds harsh, but I wasn’t about to let them play on the bed. If I did, it would only be a matter of time before one of them catapulted off the bed, landing on their head.

We did end up having a good time, me and the kids. It wasn’t nearly as painful as I thought it would be, confined to the master bedroom with my three kids for 5 hours. And most importantly Marshall had a blast. This is a party he and his friends will be talking about for the rest of the year. Marshall says they had even more fun at this party than they did two years ago. That makes it all worth it.