Do You Smell Something Burning? 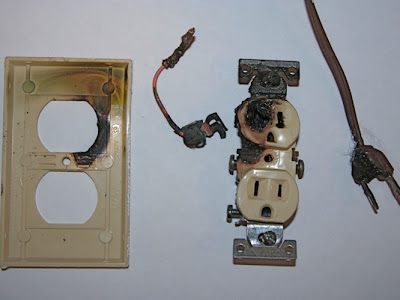 Around 6pm, Haven informed us that the TV wouldn’t turn on. We didn’t give it much thought until a few minutes later Haven said, “Oh, and I heard a loud POP a little while ago in the family room.” (where the TV is located) Ok, so that got our attention. A quick investigation of the outlets led us to discover that our old lamp plug had caught fire. That funny smell was a combination of melted plastic and burnt teddy bear. You see, in front of the plug were the toy box cubes, overflowing with toys. A pile of toys was laying against this outlet. Now the lamp was pretty old. It was from my childhood home. A nice large brass lamp. Being so nostalgic, I thought it was cool to have a lamp in my house that I remember dusting when doing my chores. Yeah well, that lamp almost burned my house down. So much for nostalgia.

The section of wall above the outlet was VERY hot to the touch when we discovered it. Oh yes, and the lamp was still on. When the plug caught fire, it must have blocked power to the plug below, which was why the TV wouldn’t turn on. Why the flame didn’t engulf the entire pile of toys laying against it, or catch the beadboard wall and eventually the beautiful wood ceiling on fire, is a mystery to us. It could have very easily burned the house down. We believe it was an act of God. Truly. We had smelled the funny smell for hours.

The teddy bear was a casualty, as was the lamp, outlet and outlet cover. There are also flame marks on the beadboard paneling just above the outlet. Marshall first turned the lamp off. Then he turned the breaker off. He disconnected the burnt outlet from the wires, then turned the breaker back on to make sure the wires were not the problem. When that was clear, he installed a new outlet and outlet cover. He tested it and it worked. And power was now getting to the TV again. (most importantly)

So, having narrowly avoided a house fire, we did what we felt was necessary. We put the kids to bed, and opened a bottle of wine. And we tried to relax. I’m so thankful it happened when we were home, and thankful it was not worse. I’m thankful for so many things.

Today after church we went to a lamp store to pick out a lamp. We were looking for a large 3-way (wattage) table lamp that wouldn’t catch on fire. Oh, and it had to match our decor also. We walked in the lamp store with our three munchkins. Small kids in a store with thousands of lamps and other breakable decorations is a potentially hazardous combination. Marshall and I both walked up to the same lamp right away. Sure enough it was a 3-way lamp and matched our decor. I didn’t really see anything about it’s fire-starting ability on the information card, but I’m hoping a brand new lamp will fare better than our old one. Plus it was on sale. We flagged down a salesperson and we were in and out of the store in under 10 minutes. Glorious.

We set up the new lamp when we got home. It fits the space even better than the old lamp that I used to be so attached to. Funny how a little thing like starting a fire can dampen my attachment to an object. We’ve removed the toys from the area and will work on coming up with a new arrangement for toy storage. Something that doesn’t involve tons of toys pushed up against the outlet.

A perfect excuse to throw away sort the toys. I’m sorry honey, we can’t have toys anymore because they will cause the house to burn down. Now go play with some dirt.