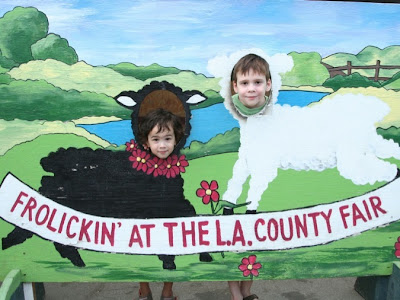 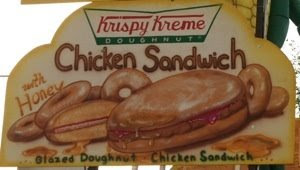 Marshall had a day off yesterday, so we went to the L.A. Fair. The kids had a blast! Not to mention that they can now tell the difference between a cow, pig, sheep, goat and chicken.

Do they need to know what farm animals are anyway? Is that really going to help them in life? Growing up in L.A.? Instead, they’re learning the important things in life, like how to order a drink from Starbucks, how to shop, the best restaurants, the best malls, how to navigate freeways, find parking, and how to distinguish between the “West-side” people and the “Valley” people. Knowing the appropriate applications of the word, “like” in a sentence, as well as the directions to the nearest In-n-Out Burger from any given location. You know, important things.

What was I talking about? Oh right, the L.A. Fair. Where else can you find tasty treats like a Krispy Kreme Glazed Doughnut Chicken Sandwich? Yeah, actually I didn’t try that. Though I am kicking myself for not trying the deep fried avocado with the ranch and pesto dipping sauce. KICKING MYSELF.

Haven tried his very first roller coaster and was completely traumatized by it. Marshall went on it with him and said it was actually a very rough ride, so probably a bad first choice. We decided to stick to the safe kiddy and family rides after that. We did the ferris wheel, carousel or “carous-go-round” as Haven called it. We did the bumper cars, ring toss and every “kid” ride we could find. We realized when we were originally going to leave that we had not yet seen the animals. So we turned back, gave Haven the map, and off we went to find the animals. At one point Haven said, “According to my calculations, the animals should be right beyond that building.” Who talks like that? Anyway, he was right and we found the animals which, like I said before, was an educational experience for all the kids. And Marshall, with his photographic abilities, managed to take a very nice picture of a baby chicken butt.

We did a bunch of the midway games, trying to win the big stuffed animal prizes. Most of the time we lost horribly, walking away empty-handed. Marshall and Haven did a water-shooting race and agreed that whoever won would give the prize to Marlie. Marshall won and picked out a big green bear for her, that she cuddled in her stroller for the rest of the time. Seamus and Haven did a fishing game where both of them snagged frogs and each were able to pick out a prize. They both picked stuffed animal fish. Seamus picked a pink one and Haven picked an orange one. Haven was old enough to read the sign that EVERYONE gets a prize, so it wasn’t as big a deal to him, but Seamus was so incredibly proud that he himself had won a prize. He carried that fish around the rest of the day, held it in his lap for the drive home and even carried it to bed with him at bedtime. He had so much fun on all the rides (except the bumper cars) that I asked him which part of the day was his favorite. He gave it some thought and then said, “Winning my fish was my favorite.”

We were there for 5 hours with three children and no naps. It’s amazing we made it and actually had fun. Last night when Haven prayed his bedtime prayer, he said he was thankful he got to do everything he had wanted to do at the Fair. What a sensational memory to take away from that experience.