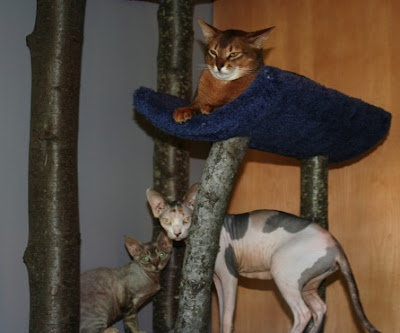 Yesterday I got a call from our vet who had the results of the tests she ran on Sunday, for our sick kitty Oz (Devon Rex). The most surprising results, however, came from our seemingly healthy Abyssinian, Giles, who was there for a regular check-up. He tested positive for Giardia. Since Giles has it, it’s very likely the other ones have it or at the very least have been exposed to it. With young children in the house, the vet wants to treat all three kitties for the Giardia though scientists (and vets) don’t seem to agree on whether or not Giardia can be passed from cats to humans. Still, it’s very icky to think about... and I’m picturing thousands of Giardia spores all over the house in my mind. A five day course of medication for three cats = more money I have to pay the vet. And of course they need the exact weight of each of the cats, so that means I had to bring in Buffy, my Sphynx, for a check-up today. I figured why not go ahead and see how much money I can end up paying the vet... so I brought my outside cat, Yemen, for a check-up today as well.

Now back to the test results for Oz. His blood test results confirm that his body is trying to fight a major infection. She diagnosed him with stomatitis, meaning he has a severe oral infection with mouth sores that are making it painful for him to eat. She thinks it is treatable, but not curable. She prescribed antibiotics and pain medication (so he will eat), along with the Giardia meds and then we will see if he improves. The vet told me that with some cats, all they can do is treat the pain, so they will eat. This very possibly might be an ongoing, lifetime treatment for him. Sounds expensive. The vet believes the problem is due to a weak immune system due to poor genetics. Apparently I picked the wrong breeder when I decided to get a Devon Rex. I thought I was doing my homework... contacting and interviewing several breeders, finally deciding on one from British Columbia. We corresponded several times a day for a couple of weeks before I sent her the money and she sent me the cat. Then, interestingly, I did not ever hear from her again. My emails to her went unanswered. Hmmm.... I mentioned this to my Sphynx breeder, who I should have consulted first, and she informed me that this breeder has a reputation for producing sickly cats. Now Oz is seriously one of the sweetest cats known to man, but he has really never been the picture of health. Nothing we could put our fingers on. We had the vet check him out when we got him, but he never did seem as healthy as the other cats. Now it seems the problem is his immune system. Serves me right for buying a kitty from a Canadian. Oh hey... wait a minute. I’m not prejudice. Some of my best friends know Canadians. Totally kidding. My aunt married a Canadian and had three very lovely 1/2 Canadians with him. In fact, Canadians are great, really. Even if they do talk funny.

So where was I? Oh yes... the vet bills..... So far the total amount I’ve paid the vet this week is $898.34. And in a week I need to bring Giles back in for a follow-up fecal test to see if the Giardia is gone. And the vet thinks she will need to prescribe another week of antibiotics for Oz after we are finished with the current course, but first she needs me to bring him back for another check-up in two weeks to see if he has improved. At the very least, the follow-up visits will end up costing another $186.42 which will bring my total up to $1084.76 this month. And of course that is if the Giardia is cured the first time around (which rarely is the case in multi-cat households) and if Oz no longer needs pain medication or antibiotics (which is also not very likely). Forget the “very nice” Coach purse I could have gotten... I’m much closer to a Louis Vuitton purse or even a new iMac. And my birthday is just days away. (sniff, sniff)

Who’s idea was it to have cats anyway? Anyone want a sickly, immune-system-challenged (Canadian) Devon Rex with a costly lifetime treatment? I’ll make you a very good deal.
at 4:14 PM