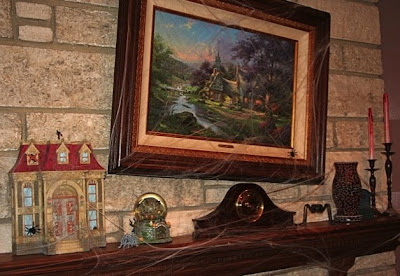 I’ve always loved Halloween. What’s more fun than dressing up in your favorite costume and getting loads of candy? Unfortunately it’s also my sister’s birthday. I have many painful memories of not being allowed to start trick or treating until we had properly sung, “Happy Birthday” to my sister, “celebrated” with her and cut the cake. Yeah, Yeah... I know it’s YOUR birthday and everything, but can’t we just go and trick or treat now? My sister probably has birthday “issues” as a result of years and years of her siblings never wanting to be there on her birthday. I could never for the life of me figure out why we needed to do a family birthday party right before trick or treating time. That’s just setting up your other kids for resentment about delaying the candy time and building up “issues” for the birthday girl whose siblings are forced to attend... all the while asking, “Are we done yet? Can we leave now??”. And my resentment...is it toward my parents, over the poor timing of the mandatory birthday party? Or should I be resentful toward my sister, for picking that particular day to be born? She probably could have hung in there another day or so, dug her heels in... maybe grabbed a rib or something to keep from getting pushed out. I’m sure at her age now, she wouldn’t mind the idea of being one day younger. OH HEY. Did I just say that? That’s not nice at all. One day just wouldn’t make much of a difference at her age anyway. Love ya sis! Don’t feel bad. You won’t be officially “over the hill” until next year. Don’t worry though. You may feel like a million, but I’m here to tell you, you don’t look anywhere near that old.

What was I talking about again? Oh yes, the joys of Halloween.

Every day since the Halloween decorations appeared in the stores, I’ve been asked the same question over and over by my younger son.

Seamus: “Mama, We gonna make our house a ghost house???”

Now that he’s 3, this is the first year he has been really aware of this particular holiday and for some reason, he is really excited about it. Haven was completely freaked out by Halloween from age 3 until age 6. (in part due to an idiot teenager in our neighborhood who jumped out at him, screaming, from behind a bush on Halloween night when Haven was trick or treating at age 3) Now Haven approaches the holiday with conflicted feelings. No one is really sure which will win out... his fear of the holiday or the motivation for acquiring candy. With Seamus’ excitement over the holiday and Haven’s recent venture out of freakout-ville, it’s a very delicate balance when decorating the house for Halloween. Anything grotesque is out. So are skeletons, skulls and witches. Cute, Casper-like ghosts are ok as well as pumpkins, bats, spiders and spider webs. Spooky houses are ok, as long as they aren’t TOO spooky. And I can decorate the house, as long as all the decorations are restricted to one room only.

So we went to the party store to pick up some Halloween decorations for our “one” room. (the dining room) For the past 3 years, Haven has refused to even go to the party store during Halloween season due to the scary decorations displayed. This year his logic has helped keep him from completely flipping out, though he was not happy to find out we were going. Fortunately Marshall was with us. Even though Seamus had been so incredibly excited about the holiday, the grotesque decorations were enough to freak him out. Marshall was able to hold him and help comfort him while I got the shopping done. Marlie however, giggled and yelled, “hello” to all the skeletons and zombies and bloody heads on display. I never know with that girl. She completely freaked out, shaking and crying at the animated jungle animals while watching the Disney movie “Tarzan”, yet giggled at all the skeletons and zombies that were freaking out her brothers.

Though Seamus got scared at the party store, he quickly recovered and continued his quest to ask me on an hourly basis if we were going to make our house a ghost house. After enduring a couple of weeks of this questioning, I finally started the transformation.

Since I’m limited in the decorating possibilities, I decided to focus on the spider webs. Lots of them. Every picture in the dining room, as well as the chandelier, fan and fireplace mantel gets the spider web treatment. The boys then get to decide where the fake spiders are placed on the spider webs. Seems a little wrong to put spider webs all over my Kinkades. Oh well.

Anyway, Haven would probably prefer I not decorate at all for Halloween. Seamus is super excited about “making our house a ghost house”. Marlie hasn’t really said anything either way. Hopefully my cleaning ladies won’t attempt to clean up the spider webs when they come on Monday.
at 4:31 PM

Email ThisBlogThis!Share to TwitterShare to FacebookShare to Pinterest
Labels: holidays