Do I Look Expensive? 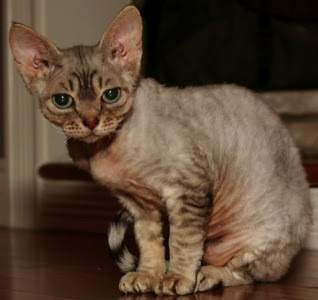 My kitty Oz (the Devon Rex) is sick. His eyes and nose are runny, he’s losing weight and his hair is falling out. Since I can’t quite imagine taking all three kids AND an animal with me for a 2-3 hour visit to the vet, I waited until Marshall had a day off so he could watch the kids. Lucky for me, the vet is now open 7 days a week. My kitty Giles (my Abyssinian) was due for his vaccinations, so I decided to take him too.

As I drove up to the vet’s office, I noticed they had undergone what looked like a multi-million dollar makeover inside and out. That should have been my first clue that I could not get out of there without it costing me an arm and a leg.

The vet saw Oz first. Yes he’s in bad shape. Yes he’s in pain and not eating. The vet then proceeded to spout off a long list of possible ailments that could be causing his symptoms, which may or may not be treatable. She then said she would write up the list of tests she wanted to run on him and the receptionist would bring me the bill for approval before they take him. About 20 minutes later, the receptionist walked in with a bill for $649. That’s only for running the tests... no treatment included. The receptionist is looking at me, waiting for an answer, and I’m totally feeling like a putz. It’s like going to a funeral home and picking out a casket for a loved one. “No, no, we don’t need the velvet-lined mahogany one, a pine box will do just fine, thank you.” So, like a totally bad kitty mommy, I ask the receptionist if there are some tests we can take off the list for now. I’m not sure I love him $600 worth... can we just do a couple of the tests? They were able to knock off $200 worth of tests and only run the most important ones for now. Again, this is only for running tests. No treatment included. In a couple of days we will get the results and then will find out how much Oz’s illness will end up costing us for treatment. While we were there, the receptionist apparently fell in love with Oz. She went completely nuts for him. After seeing the vet bill I considered letting her have him, if she would pay his bill. No, that’s terrible. I could never do that. I think.

On a side note: It’s always fun to ride in the car with cats. It’s like a cat symphony. The best is when they meow at exactly the same time. Like cat harmony. Maybe I was giddy from the vet bill, but I decided to test out different kinds of music on them during the drive home. Queensryche seemed to upset them as much as Enya. They didn’t much care for Lauryn Hill or my Ethiopian music either. They did, however, get completely quiet when I played Coldplay. Not sure what that means.

We’re all home now and the cats are recovering from Queensryche the vet. With some canned cat food for the kitties and a couple of glasses for wine for me, we should all feel a lot better.
at 4:13 PM