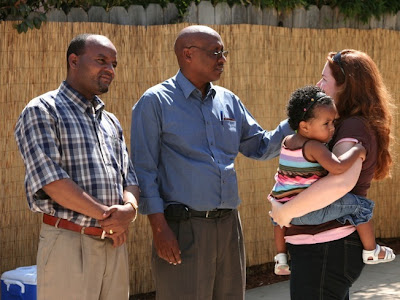 Every year Dr. Tsegaye (WHFC’s in-country representative from Ethiopia) comes to the U.S. for a reception in his honor. It is a chance for him to see the children and families again. The reception is held on the East Coast, where the agency is located and most of the WHFC families live. As the Ethiopian program has grown, many families (like mine) from other geographical areas have adopted through WHFC. This year WHFC has chosen to have receptions for Dr. Tsegaye on the west coast as well. (Los Angeles and San Francisco) Also this year Dr. Tsegaye is being accompanied by a government official. Dr. Kebede is the Cultural Commissioner of the Sidama area. He overseas child welfare work in the area, where many of the children adopted through our agency are from (including our daughter). Dr. Kebede wanted to meet the adoptive families and see how adoption is working on this side, observing how well the children are thriving in their adoptive families.
Dr. Tsegaye is one amazing person. To date, WHFC has placed over 400 children who have come through their care center, and Dr. Tsegaye remembers all of them by name. He remembered our daughter. She was only at the care center for two months as a baby, but at the reception she warmed up to Dr. Tsegaye more quickly than she usually does to “strangers”. I had to wonder if there was some part of her that remembered him. He must have felt familiar to her and she was clearly receptive to it. Dr. Tsegaye’s love for the children is evident after just a few minutes of observation. He wants to hold each and every one of them and speaks so lovingly to them.
I must admit the thought of a “government official” coming to observe our adoptive families sounded a bit scary. Ok, time to drug the kids so they are super compliant while the nice government official observes us and takes notes. (KIDDING!) Actually Dr. Kebede was really friendly and down to earth and I had many wonderful conversations with him. Amazingly, he thinks he knows Marlie’s uncle! He said he will look him up as soon as he gets back to Awassa. Marlie’s uncle (and aunt) are raising Marlie’s 4 older sisters. With Dr. Kebede’s help we should be able to have a more accurate idea of what exactly the family’s needs are, so we can help them more effectively, beyond sponsoring the sisters. Dr. Kebede and I have exchanged email addresses. Wow, I must be pretty important to have an Ethiopian government official exchange email addresses with me! Anyone want my autograph? No?
So the reception was on Sunday, but Dr. Tsegaye and Dr. Kebede weren’t leaving town until Monday evening. Marshall and I were in charge of taking them sight-seeing Monday. We were wracking our brain the night before the reception trying to think of what they could possibly be interested in seeing. I have no idea how much American culture reaches Ethiopia. How much do they know about the entertainment industry? Are they even going to know the names of the people on the Hollywood Walk of Fame, or the names of the handprints in front of Grauman’s Chinese Theater? Do I really want to drive them around Beverly Hills, where blatant materialism runs rampant? Do I take them to a museum? And if so, which one? Well, we decided to ask them what they wanted to do at the reception. Without hesitation, Dr. Kebede said, “We want to see the movie studios.” And apparently they already checked out the Hollywood Walk of Fame and the cement handprints on their own, which was an easy walk from their hotel.
Early Monday morning, Marshall called his friend Rob, who works at Universal Studios as a mix tech (assistant to the mixers) for post production sound. He actually used to be Marshall’s assistant at a different facility. Rob very graciously agreed to get Marshall and the doctors clearance onto Universal’s back lot. Rob drove them around on a golf cart and gave them a private tour. He took them by all the sets and buildings. Rob explained to them how they keep reusing the buildings by repainting them and putting different dressing in the windows for the next movie. He then drove them around the back to see that the buildings were nothing more than facades. Dr. T and Dr. K were very surprised and thought it was so funny to see that all the buildings were fake. After about 10 minutes, Dr. Tsegaye started asking if everything was fake.

Dr. Tsegaye: “Are those trees fake?”

They seemed to really enjoy the tour. Marshall said there was lots of laughing and pointing from the doctors. Dr. Kebede recognized the Bates Motel from “Psycho” and said, “Oh my god, I remember that scary house!”.
After the Universal tour, the kids and I met up with Marshall and the doctors for lunch. We took them to California Pizza Kitchen, which was a definitely a hit. They loved the pizza. We totally lucked out, because our favorite server Melanie was working and she took fantastic care of us. (putting in the kids’ orders before we sat down, and YES she knows what all our kids like to eat and drink) At lunch Dr. Tsegaye told me they loved the private studio tour and that it made them feel like VIPs. Well, to us they are VIPs. We had a great time at lunch and I was able to have some more in-depth conversations with Dr. Tsegaye and Dr. Kebede. It was truly an honor for Marshall and I to get to spend so much time with them. After lunch Marshall drove them around to see more sights (the Hollywood sign, etc.) before dropping them off with the person who was taking them to the airport.
After Marshall got home, he called Rob, thanking him again for doing this special favor for us. Marshall explained the identities of the gentlemen and the importance of the visit to Rob.
Rob: “So basically it’s because of me that you get to keep your daughter?”
Marshall: “Uh.....”
Rob: “Well that’s what I’m going to tell everyone anyway.”

**UPDATE** If you came to my blog from an Adoption Reform blog, please CLICK HERE to read my response.
at 3:03 PM