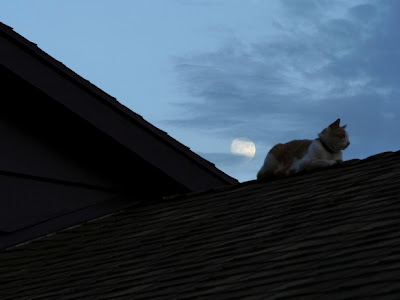 What is it about the full moon and it’s abilities to make everyone act batty? Everyone except me, of course. I’m completely normal all the time, full moon or not.

Back when I was in the locked psychiatric unit (as an EMPLOYEE, people!), we could always tell when it was a full moon. All the crazy sanity-challenged people would act even more... well.... crazy.

Yesterday I had one of those days. We picked up lunch and headed over to the local play gym for the kids to run around and have fun. Marlie has always been preoccupied with food, but yesterday she went a bit overboard. After she had completed her lunch, she also wanted what was left of everyone else’s lunch (that I/they were still eating). When she was told “no”, she had a colossal meltdown with kicking, screaming, hair pulling (mine) and scratching. I saw lots of raised eyebrows from other moms in regards to my out-of-control daughter. This happened several times while we were there. She has always loved food and doesn’t like to be told “no”, but this was extreme behavior, even for her. Toward the end of our visit, I gave Haven the usual ten minute’s notice that we were leaving. Eight minutes later, I told him we had two more minutes. He burst into tears loudly in what can best be described as a two year old tantrum. I was shocked, as I had not seen this from my 7 year old in a long, long time. I told him to come right away as we were leaving NOW, instead of in two minutes.

I then gathered Marlie and Seamus as we made our way to the front desk/lobby area where all the shoe cubbies are. We proceeded to take off our play socks and put on our shoes while Seamus started to have a full blown meltdown. He too was upset we were leaving. As we were getting our shoes on, we saw an old lady (through the gym windows) that was walking outside the play gym (which is located in a strip mall). For some unknown reason, she walked right into the wall outside one of the stores, cutting open her head which resulted in blood dripping down her face. One of the other moms that was getting her shoes on, (I’ll call her “drama queen”) starts yelling and screaming in horror at what she just witnessed. She immediately calls 911 and tells them about the old lady who ran into the store glass window (she didn’t, she ran into the wall) and has blood pouring down her face. (I would personally say it was more like a quick drip) Anyway, Drama Queen proceeds to flip out and yell (still inside the play gym) the entire time she is talking to the 911 dispatchers, and appears to be having a panic attack herself. As I’m about to walk out, Drama Queen grabs my arm and asks me if I can watch her baby (asleep in a baby carrier on the floor) while she helps out the old injured woman. Without waiting for me to answer, she ran out of the play gym to find the woman. Now here I am, with two kids in full meltdown (oh yes, Marlie resumed her meltdown again), stuck in the lobby of the play gym, watching the baby of Drama Queen. Why she felt it was Ok to leave her baby with a complete stranger (me), I have no idea. Maybe she figured I had enough kids, that I wouldn’t run off with hers too. This was the same woman (I was told by the manager) that asked if she could break the “everyone has to wear socks at all times” rule when she goes to the bathroom because she doesn’t want to get “bathroom germs” on her socks.

So, back to the injured old woman. She apparently had wandered into a pharmacy in the strip mall after her injury. Well Drama Queen felt it was best to go and fetch the injured old woman out of the pharmacy and bring her INSIDE the play gym where all the young kids could see the now dried blood all over her face. Drama Queen continued to freak out and hoop and holler loudly until the ambulance arrived. Meanwhile my younger two are STILL in full meltdown. I can’t leave because Drama Queen has gone back outside to jump up and down and wave her arms so that the approaching ambulance can see her. I can’t help but wonder if they shouldn’t have just treated the old woman at the scene and taken Drama Queen in the ambulance instead.

So now I have been stuck watching Drama Queen’s infant for 15 minutes, while my younger two kids were STILL in uncharacteristic-like meltdowns. Finally Drama Queen walks back in for a quick minute. I seized my chance and grabbed Drama Queen’s arm (as I’m pretty sure that was the only way to get her panic-attacked attention). “Lady, I NEED to go!” And as soon as she acknowledged I was no longer going to watch her infant, I left.

My usually happy and well behaved children continued the crazy behavior and meltdowns the rest of the day. They ALL went to bed early that night. As I was walking across the living room window, I noticed the full moon and the day’s events suddenly all made sense. From now on, I need to keep better track of the appearance of the full moon, and you can bet I will stay home on those days!