Sometimes I Wish My Kids Had A "Mute" Button 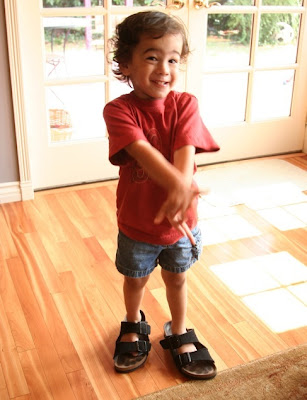 Staples advertises an ‘easy’ button. Some days I wish I could get a ‘mute’ button for my kids. Today was one of those days.

It all started this morning when our doorbell rang. It was the neighbor across the street. He wanted to know if I knew the identity of a dead cat who had obviously just been hit by a car in front of my house. I did. The cat belonged to our next door neighbors, who are from Pakistan. It’s very sad when a cat gets hit by a car. That happen to one of our cats once. Unfortunately the cat’s owners weren’t home, though I did convince the other neighbor not to call Animal Control to dispose of it, but instead to wait for my next-door neighbors to arrive home. If it was my cat, I’d want the choice to bury it in my backyard and I was guessing my next door neighbor would too.

Now we’re not very close to our next door neighbors. We send over Christmas cookies every year and do the obvious waves hello when we see each other but we’re not really friends. Some of it I’m guessing has to do with cultural differences. We have nothing at all against their country of origin, but they have said many things we think are rude, and I’m sure it’s just a cultural misunderstanding on our part.

After we moved into our house...

The husband: “You’re going to remove that security door on your house, right? It’s ugly.”

The wife: “Why did you get so fat? You used to be so cute and now you are very fat. Why?”

Not to mention that the husband likes to borrow tools from all the neighbors and does not return them, but instead hangs them on the outside of his house where they get rusty.

So... we are friendly with them, but not friends. After viewing the obviously dead and bloodied cat, I went back inside and told Haven what happened. He announced that he wanted to see the cat. Seamus overheard bits of what I said and stated that he wanted to go outside too. Marlie was still sleeping, so I decided I’d take the boys outside. The neighbors weren’t home, so I figured it wouldn’t do any harm to allow my curious boys to see the carnage.

Well... by the time we went outside, the neighbors had arrived home and had been alerted to the death of their beloved kitty by the neighbor across the street. The father had removed the cat from the street so it was no longer there when we arrived. Instead we found a very uncomfortable situation where the family was visibly upset and shaken. I decided to walk over and offer my condolences, as they were first on the scene long ago when one of our cats was hit by a car. Their teenage daughter was crouched at the edge of their yard, head in her hands and shaking from her sobbing. The mother was standing by her, also crying and trying to comfort her daughter. I offered my condolences to the father, who was still in shock saying things like “I just fed the cat this morning. It was such a loving cat”. Meanwhile, the entire time I was trying to offer my condolences, Seamus was saying loudly, over and over again, “I want to see the dead cat!” “I want to see the dead cat!”. In fact he was very upset there was no dead cat for him to see and he said it louder and louder as I was not addressing his request. “I WANT TO SEE THE DEAD CAT!” Then Haven, trying to be helpful said loudly and excitedly, “There is the blood on the street! That must have been where the cat was!”

I wish my kids had a mute button.