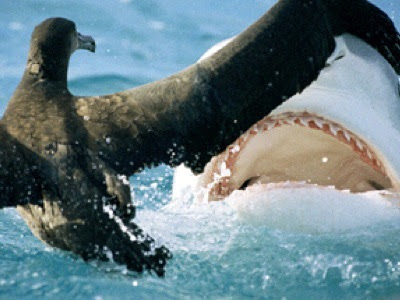 This week is Shark Week. It’s always been a huge event at our house. Our TV hardly ever strays from the Discovery Channel every year when this week comes around. Then of course we get out all the shark books and study sharks when the shows aren’t on. It’s all sharks ALL the time during Shark Week. They repeat much of the previous years programming, so we go through the television guide and TIVO all the shark related shows we want to watch. The best ones of course are the ones related to shark attacks or show sharks ambushing various prey. (seals, albatross, penguins, etc.) Haven and I were watching “Eaten Alive” the other day about shark attack victims (that survived) telling their tales. One lady said, “My friends were trying to pull me on the boat and the great white had a hold of my leg and was trying to pull me down. Then I heard a “pop” and I knew my leg was gone.” Man, that’s good television right there.

Of course they do all the cheesy reenactments of each shark attack. Haven will look at it very skeptically and say, “That’s probably ketchup they are pouring in the water to make it look like blood.” Already 7 and Hollywood magic can’t fool him. Even so, we thought the one program we were looking forward to the most might be a bit too much for him. It was the one about the worst shark attack in history... where the USS Indianapolis went down and 900 survivors were whittled down to 300 by the time they were rescued. Various eyewitness accounts of sailors getting picked off one by one by the sharks. Again, great television. So Marshall and I decided to watch it after the kids were in bed.

So the kids were in bed and Marshall and I were watching the overly-dramatic special and all of the sudden, BAM.... an earthquake. Nothing like an earthquake to add to the suspense of sailors getting eaten alive by sharks. It was nothing major... a 3.2, but the epicenter was 5 minutes from our house, so big enough to give us a jolt.

Question: Why is my instinct always to clap my hands over my ears when I feel an earthquake? Am I somehow thinking by covering my ears I can telepathically stop the earth from shaking? I guess that’s one of those questions I’ll never know the answer to, like why do I always have the urge to poo when I go to the bookstore? Hmmm... that one’s just me, huh?
at 2:49 PM