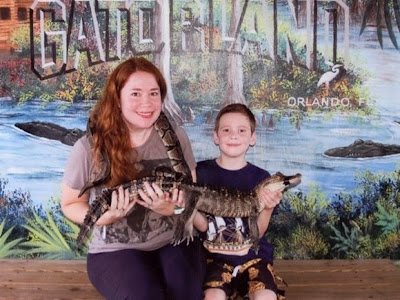 We just got back from our vacation to Orlando. It took two flights and 7 hours to get to Orlando, and 3 flights and 8 hours to get back. I was very much wishing I had chosen the more expensive non-stop flights instead of the cheaper, multi-stop flights. Marlie flew as a lap child. Despite the drugs, Marlie was not happy to be stuck on my lap during the flight(s) and after that experience, I vowed I would not fly with Marlie again until she is at least 3 years old. Actually I made that vow on the way to Orlando, which was kind of hard to keep, seeing as though we did have to fly back at the end of our vacation. And though I did have to break that vow for the return flight, I again vowed I would not fly with her for a long, long time. Seamus on the other hand, who had always been a very difficult flyer in the past, did a fantastic job on the plane the entire time. He loves airplanes and is finally old enough to get really excited about being inside one. He would yell, “TOUCHDOWN!!!!!” usually right before the plane would touch down each time. I’m sure all the other passengers appreciated that. Haven was great on the plane too. This is the first time he has taken an interest in the airplane safety cards, studying the locations of the emergency exits and practicing the various suggested crash landing positions. Very exciting to think about right before the plane takes off.

We arrived around dinner time and started the trip off right by eating dinner at Cracker Barrel. Man I wish they had one of those in LA. That and Chick-fil-A were on the top of our list of places to eat while in Florida.

The highlight of our trip was definitely our day at Gatorland. Haven and I just HAD to do the cheesy staged photo holding the alligator and snake. I have memories of getting my picture taken at Gatorland several times when I was growing up. I always chose to hold the snake because I thought it looked more menacing than a gator with tape around it’s mouth. This time it was very cool to take the picture with my oldest. His first time holding an alligator and he was as brave as can be.

Gatorland is awesome. They’ve got the gator wrestlin’ show, an aviary, a train tour, a splash park, jungle crocs of the world, snakes, a suspended boardwalk/nature walk through a cypress swamp, a petting zoo and a gator jumparoo show (where gators compete for dead chickens hung high above the water). They also have a boardwalk where you can walk above a 10 acre breeding marsh and see many of the 130 alligators swimming underneath you. You can even buy turkey hot dogs and feed the gators. Hard to say which was my favorite, but I always enjoy the jumparoo show. Seeing huge alligators jump out of the water to grab the chickens is very cool. Marshall got some nice action shots. They had the two “entertainers” (gator feeders) putting on their best hillbilly impressions and a couple of skits before they got to the gator jumping. I was a little surprised when the entertainers stuck dead chickens on each of their hands and proceeded to box each other. Not something I’ve seen before. Don’t worry. We have pictures. It was pretty darn hot that day. The temperatures reached 102 degrees that day, and with 72% humidity, it was a heat index of 114. We were all drenched in sweat but still managed to have a great time.

Central Florida has long been known as the “lightning capital of the world”. Since we vary rarely have lightning and thunderstorms in LA, this was a new experience for the kids. One evening while we were driving to dinner, we were having a lightning storm. Even after having grown up in Orlando, I can say it was one of the biggest lightning storms I’d ever seen. Lightning was everywhere, hitting the ground all around us while we drove on the interstate. One lightning strike hit a pole right next to the interstate as we were passing by it. The vibrations from the lightning shook the ground with a deafening sound. It’s like going to an amusement park without the expensive entrance fees. Fun for the whole family.

The rest of our time in Orlando was spent hanging out with family and friends. The kids spent some quality time with their grandparents and Marshall and I got to go on a date. As with most vacations, we felt like we didn’t get enough time to do all the things we wanted to do/see all the people we wanted to see, but at the same time were ready to go home and sleep in our own beds by the end of the trip. I did have a couple of close encounters with those huge flying roaches. I kind of think of them as more like near death experiences, but I did manage to survive, with the help of my bug extinguishing hubby. I also got several mosquito bites but did manage to avoid getting bitten by fire ants, though there were several occasions where I almost stepped into a fire ant nest. We were reminded by our trip that as tempting as the house prices are compared to LA prices, Florida really is full of bugs.

Glad to be back home in my virtually bug-free, humidity-free environment.
at 2:59 PM