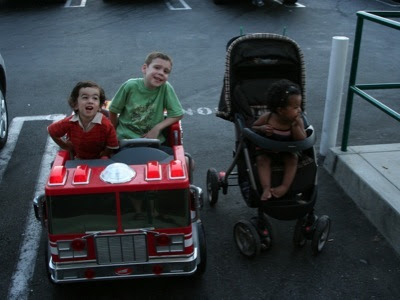 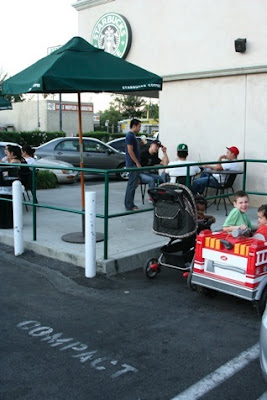 Yesterday evening while on a walk with the fire truck, we decided to venture outside our neighborhood and over to Starbucks. A mocha frappuccino light was calling my name. (much the way Dr. Pepper often does)

Haven was delighted to be able to pull into a parking spot, though I must admit it was slightly nerve wracking to have him maneuver the fire truck so close to a real car. I had visions of him losing control and smashing into the car next to him. He maintained complete control, however, and pulled into the spot without a problem. Me and the kids hung out in our compact parking spot while my assistant husband went in to get my drink.

I’m sure we were quite the spectacle, standing there in the parking lot while Haven repeatedly turned on the siren and lights, and Seamus made announcements over the CB radio. Marlie was busy staring back at the people who were staring at us.

When Marshall returned with my drink, it was time to head back to the house. Haven did a terrific job putting the fire truck into reverse and whipping it out of the parking space like a pro. He then switched it to “forward” and we were on our way back home.

That fire truck is so much fun. It was a very generous gift from my dad and stepmom a couple of years ago. We have gotten so much use out of that thing. It is battery powered and has a setting where it can go 2.5 mph or 5 mph. We’ve kept it at the 2.5 mph since we purchased it. I think it’s better for everyone if we keep it at that setting for now. Haven doesn’t even know it goes faster. You can also fill up the back reservoir with water and spray people with the fire hose, but we just told Haven it’s “pretend”. Ok, so that was not exactly the truth, but I’m the one walking behind them (and the most likely target). Besides, the kids still have a blast pretending to squirt us and each other with the hose. That’s one of those features that makes me think the designer either doesn’t have kids, or else he or she is a grandparent and is trying to get back at their own kids for whatever trouble they caused while growing up.

My dad is one of those kinds of grandparents. At Christmas and birthday time, he heads over to the local toy store and pushes every button of every toy. His objective is to find the loudest, most obnoxious toy which will delight our kids and more importantly, annoy us. I’m happy to say that with the fire truck, he failed. We enjoy it as much as the kids do. The only down side is that there isn’t a third seat for Marlie. Maybe we can find some way to duck tape or velcro her to the back. Kidding! I suppose when Haven is too old for it, it will be Seamus’ turn to drive Marlie around in that thing. The world better look out when that happens. The Wondertwins, driving around the neighborhood in the fire truck will be a sight to see for sure! Maybe by then I can send them on their own in the fire truck to get Mama’s tall mocha frappuccino light. (no whip!)

Email ThisBlogThis!Share to TwitterShare to FacebookShare to Pinterest
Labels: gadgets