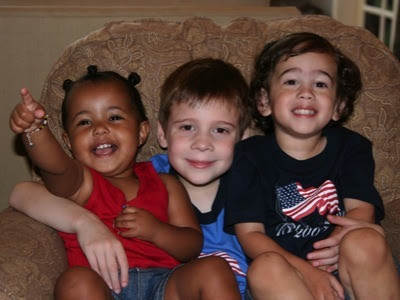 We started our 4th of July celebration by putting the kids in their patriotic Old Navy shirts and then decided to take a picture to send out to the family. We took 46 pictures. Someone should videotape us taking pictures of our kids because I’m sure we are a sight to see. Marshall has the camera and then I stand behind him and make noises to get their attention and threaten to tickle them. If that doesn’t work, I threaten bodily harm. (kidding) I then run up and tickle all three and duck behind Marshall again so he can take a picture. Sometimes it works, sometimes it doesn’t. I do this over and over and over again until we feel we have gotten at least one good one. In 46 pictures, 3 were good enough to email out. I’ve included one of the good ones, as well as 4 “rejects” below.

Then we did what any self-respecting American family would do to celebrate the 4th of July... we went to our favorite Ethiopian Restaurant for lunch. (Messob in Little Ethiopia) My current favorite meal there is the Bozena Shiro and Tomato Fit Fit. Makes my mouth water just thinking about it. We also got some Shiro Wat for the kids.

We then went home to allow the little ones to nap before attending a 4th of July BBQ. The BBQ was hosted by a family from church. There were a ton of people there. Kids running around everywhere, which is always fun to see, especially since it wasn’t my house.

We had a great time at the BBQ catching up with old friends and making new ones. Around 7:30pm we decided it was time to leave so we could go to our favorite spot to watch fireworks. Every year for the past few years we have found a great spot to watch fireworks. It’s on top of the parking garage across from Ikea in Burbank, which is a great place to watch the 9:00pm fireworks show from the Starlight Bowl. Since no idea is an original idea in Los Angeles, we have to make sure to get there early to get a parking spot. The almost empty parking lot should have given us a hint, but we figured we got there too early and headed off to Barnes and Noble to waste time until closer to 9pm. We headed back to our car at 8:45pm to a very suspicious-looking empty parking lot. We called our friend who lives in Burbank to see if the fireworks show was happening and he informed us that the fireworks had been cancelled due to the extreme fire danger. Fireworks of all kinds here are illegal except for the official fireworks shows, due to the fire danger. We weren’t however expecting to find out that several of the official fireworks shows had been cancelled as well. Since we didn’t have time to make it to the Rose Bowl or another display in time, we returned home, hoping to at least catch some fireworks on a high definition channel on TV. So lame! We did see several illegal fireworks going off over the freeway on the way home which was very exciting to the kids. Haven had a hard time balancing his excitement about seeing the illegal fireworks with his sense of injustice that people were breaking the law.

We arrived home and sure enough there were fireworks on one of the high definition channels. So like a lame family, we cuddled on our down-filled couch and watched the fireworks on TV. It was 10pm when the fireworks (on TV) ended and I gave all three kids Pop Rocks so they could have their own “fireworks” in their mouths. This was Marlie’s first Pop Rocks experience. You would have thought she had been given Pop Rocks behind my back because she didn’t act like it was anything new. She just wanted more and more. I must admit, I did partake of the Pop Rocks myself and we all had a dandy time comparing the snap, crackle and popping in our mouths.

Maybe next year we will get to see a fireworks show in person, though I suppose fireworks in high definition are better than no fireworks at all. 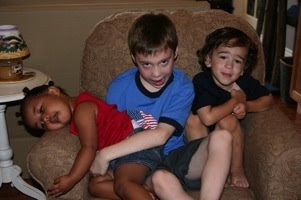 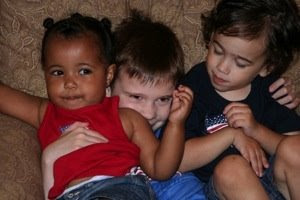 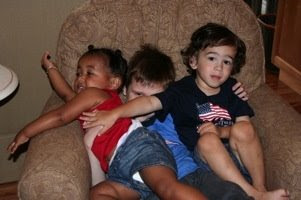 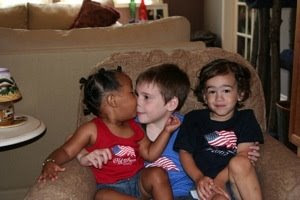 Email ThisBlogThis!Share to TwitterShare to FacebookShare to Pinterest
Labels: holidays