Seven Random Things About Me

I have been tagged by my friend Laura at No Small Feat. In the blog-world it means that I now have to share seven random things about myself. So here goes.... 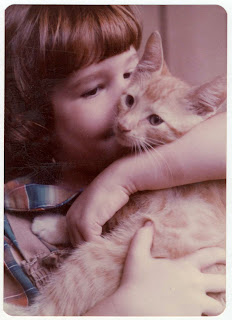 1. See that adorable kitty in the picture with me? Yeah, he got rabies and bit me. I was minding my own business... sitting outside by our pool, and I bent down to scratch my kitty on the head. BAM! He bit me. Hard. Blood and all that good stuff. The next day we found him dead in our bushes. My dad forever said he died BECAUSE he bit me. Anywho, I had to get vaccinated for rabies. If you don’t know, you have an incubation period to get vaccinated before you actually come down with rabies after you are bitten. Since my daddy was a doctor, he was able to pull some strings and I was the first person in Seminole County to get the new shots that went in the butt, instead of the stomach. (YAY for me!!) I had to have a tetanus shot and then five rabies shots. Since my mom was a nurse, she and my dad took turns giving me shots on the given days, alternating between one butt cheek and the other. It’s a wonder I still love cats. 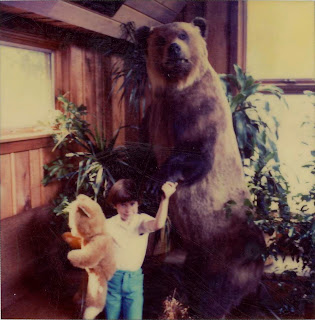 2. And this picture? That’s me at age 6 in our family room. Yes, our family room. I grew up with a variety of animals in my family room. Either entirely stuffed or as animal skins hanging on the walls or draped over the backs of the couches. And people wonder why I turned out the way I did. The two biggest animals in our family room were the 8 foot grizzly bear (pictured) and the black bear (not pictured). We had bears, caribou, deer, a bobcat, a groundhog and even a cute little squirrel that was stuffed and hanging on the wall. Looked just like he was climbing the wall. (except for the fact that he never moved) My daddy was a hunter. Sometimes I would even go with him on a hunt and it was my job to salt the hides. Oh, and I was proficient with a gun myself and got my very own rifle for Christmas at age 12. Boy was I proud!

3. I have a large Native American tattoo on my back. No specific reason why except that I wanted a tattoo and I didn’t want it to be a flower or a butterfly like every other tattooed girl on the planet had. I picked it off the wall of Sailer Bill’s Tattoo Parlor when I was 20. It’s a Cherokee shield with feathers hanging down. Everyone who has seen it thinks it’s a dreamcatcher which annoys me to no end. It’s NOT a dreamcatcher, people!!!

4. I used to raise pedigreed dwarf and lop-eared rabbits in my youth. At one point I had over 30 rabbits at once. I would put ads in the paper and sell the babies for extra money. I had the professional cages with the automated drip water system. Yeah I was totally spoiled. I’ve had a reoccurring dream for YEARS where I just realized I still have all those bunnies and I haven’t fed them in 6 months. They are emaciated and hopping around in their cages, waiting for me to feed and water them. Heavy stuff, man. Probably leftover guilt for my very first bunny that died a premature death due to lack of regular food and water. Hey, I was VERY young and my parents should have made sure I was feeding him! Poor Thumper.

5. I grew up with a poster of our current governor on my wall. If you are aware, I live in California, which means our current governor is Arnold Schwarzenegger. I’ve seen every Arnold movie ever made and if you ask me what my all time favorite movie is... I’d have to say, “Predator”. (of which my wall poster was from) Yes I know that’s a very violent/gory movie, but remember my family room? Blood and gore don’t bother me. That is... if it’s a shoot-em-up/blow-em-up kind of movie. I can’t handle slasher/horror flicks. But good old fashioned violence? Yeah.

6. I love snakes. My parents enrolled me in classes at the Orlando Science Center one summer to keep me busy. It was a class on dissecting animals. Boy was that fun. Well one day a classmate brought a live snake she found in her backyard to our class. It was a Southern Ringneck snake. I bought it from her for 10 dollars and brought it home with me. My dad, who has a snake phobia, was not too thrilled about that. I was always doing stuff like that, but my motto was: “Better to ask forgiveness than ask permission”. Back to snakes... I love them. They are so smooth. I would regularly catch them in our backyard, but fortunately for me I knew what Coral snakes and Water Moccasins looked like and I left those alone. I’d probably have a pet snake now if my husband would let me.

7. I have a roach phobia. A REAL phobia. I grew up in Florida where they have those HUGE roaches that fly. And they fly toward you and try to land on you! Palmetto Bug? That name is too nice for them. They’re roaches!!! Despite the professional bug service my parents paid for, we ALWAYS had those things in our house. I once looked up and noticed one was on the ceiling. And of course it dropped right at that moment and landed on my FACE. Then it crawled down my body, dropped onto my foot and scampered away. My blood pressure is rising just thinking about it. I’ve had other moments where I picked up a cushion in our family room and a roach (that was previously hiding underneath) would crawl up my arm. I think the lack of the larger, flying subspecies of roaches (AKA Palmetto Bugs) are reason enough to live in California. We do have roaches, but they only come out at night during the summer, which is why I will pretty much refuse to walk outside at night. If it is dark outside and I haven’t yet fed our outside animals, I make my husband do it. I can’t even walk past a dead one. The only ones I’ve ever found in our California house are ones that showed up after we had a package delivered. They must hide in the cardboard boxes, those sneaky creatures. The last roach I found in our house was dead when I found it. I couldn’t even walk by it or in any part of the house where it was in view. I knew our cleaning ladies were coming that day, so I made them dispose of it when they came. I personally think roaches are a result of the Fall of Man. Seriously. Why would God create such a vile creature? There couldn’t have been roaches crawling around in the Garden of Eden.