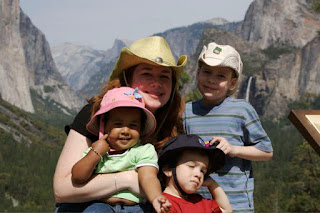 We just got back from our Yosemite mini-vacation. Marshall signed up for a photography class, which was the reason for the trip. I decided me and the kids could tag along and keep ourselves occupied, exploring the park, while my husband was in his class. We invited my mom to fly out from Orlando and come along, so she could help me with the kids. A two adult/three kid ratio is much preferred to a one adult/three kid ratio. We rented a house inside the park. People we met during our trip would often ask, “Are you camping?” Hmmm... well, if you count sleeping in someone else’s bed and sharing a bathroom, well then yes we are camping. That’s about the closest I come to camping. I mean, my tempur-pedic pillow works so much better on a bed than on a tent floor. Our rental house was a bit smaller than we thought it would be. It was about 800 square feet, but split on four stories. Not exactly the best floor plan for the rugrats. And yes, every single one of them at one point or another fell down the stairs.

So my hubby had to be in Yosemite Valley at 6:30am every morning for his class, which meant that we had to have all our provisions for the day and the kids packed up and in the car before 6am. Now I homeschool so we can keep our schedule of the kids going to bed at 10:30pm and sleeping in until between 9 and 11 am (depending on the kid). Waking up at 5am is not a friendly time for us to get up. But we did it. We managed to get the kids up and get packed for the day and in the car on time. My mom and I and the kids would start our little Yosemite excursions at 6:30am and basically have the whole day until 3pm before meeting up with Marshall. He had a break, so he would drive us back to the house and then return for the evening class. It was a little tricky to get the kids to go to sleep at 7pm, considering their normal bedtime, but with a little help from my dear friend Benadryl, we got the job done.

It was actually very lovely to walk the trails first thing in the morning. There was hardly anyone else out, so we practically had the trails to ourselves. I’m not sure that was the smartest thing however, when I noticed a large sign at the beginning of one of our trails. It said, “This is mountain lion territory. Do not let your children run ahead or lag behind.” And then it went on to give instructions for what to do if you encounter a mountain lion. I’m not sure going on that trail first thing in the morning without another soul around was the smartest thing. We were fine though. We didn’t see any mountain lions, though my oldest swore he heard a mountain lion growl when he threw a rock into the woods. Hmmmm. ok. We did notice a very fresh, large pile of poo just off the trail on our way back. My mother and I argued about whether it was bear (my guess) or mountain lion (her guess). I still think the pile of poo was too large for a mountain lion. Plus it was black, and my dad says black poo means “bear”. And he would know! Don’t ask.

We had a good time, despite the fact that our day’s supplies were strapped to my back and Marlie was strapped to my side the entire time. It took a few days for my back to recover. The little ones did pretty well waking up at that very unnatural hour and going without naps during the trip. At the beginning of the drive home Seamus fell asleep. That was until Marlie decided to grab a fistful of hair and yank it from his head. Yep, he was awake and unhappy after that. Then the whole lack of schedule caught up with Marlie. She was pretty much in full meltdown for 90% of the 5 hour drive home. At one point she FINALLY fell asleep and we were thanking our lucky stars. That is, until 15 minutes later when Seamus decided to start smacking her. Payback, I suppose for the hair pulling. Marlie woke up and resumed her meltdown until we arrived home. I need to put a plexiglass divider between their seats. Oh... and our van’s A/C & fan broke the night before our Yosemite trip, so the heat of the sun + no air circulation in addition to the mostly-constant meltdown made it an interesting drive home. Not sure my mom will be volunteering to take that trip with us again anytime soon. On the bright side... we probably saved gas, not having the A/C on.

Marshall and I agreed that we probably want to make Yosemite a yearly vacation from now on, though next year I want Marshall to be with us. That waking at 5am is for the birds. And next time HE gets to be the one to carry Marlie around all day.

To see some of Marshall’s fantabulous Yosemite pictures, click here.
at 4:52 PM