Does Marlie Read My Blog? 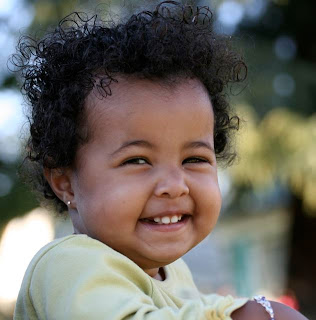 I wouldn’t be surprised. She’s so darn advanced for her age, and today’s events seem like a bit of a coincidence in light of yesterday’s entry about dealing with bodily fluids.

So it all started this morning when I heard Marlie was awake. I went in and right away my nose told me she had diarrhea. I probably shouldn’t have given my lactose intolerant daughter mac n’ cheese last night. Upon closer inspection I saw that the diarrhea had shot out the back of her diaper and was all over her outfit. Then I noticed it was all over her hands and FACE. Yes, that’s right. She was feeding herself diarrhea out the back of her diaper. What did I just say about “not changing a thing” if I had known motherhood would have brought all those gross bodily fluids into my life? Hmmmm... maybe I should have given that more thought.

So the part that makes all of this interesting is the fact that currently we have no hot water in the house. Yesterday the painters bumped our automatic gas shut-off valve (for earthquake purposes). Marshall turned the gas back on last night, but forgot about re-lighting the water heater pilot. We both realized this when we tried to take hot showers this morning. Marshall said he’d re-light the pilot tonight when he gets home from work. No big deal, I think to myself. I don’t NEED hot water this afternoon. Ha ha ha ha ha.

So my daughter is now covered in diarrhea. I need to give her a bath and I have no hot water. Hmmmm.... this takes a bit of problem-solving skills. I can boil water on the stove, but I need to figure out the right boiling water/cold water out of the tap ratio for bathing her in the sink. It was a bit complicated, especially the part about shampooing and rinsing her hair (cause you KNOW she was rubbing the poop in her hair too), and rinsing her soapy body with clean (not boiling and not cold) water.

While I was bathing her, my 7 year old son asked me what I was doing....

Haven: “Mama, what are you doing?”

Me: “Because she had diarrhea and was scooping it out of the back of her diaper and eating it.”

Marlie has other talents, by the way (besides eating her own poop). If there is an unflushed toilet in the house, she will find it and will splash around in it up to her shoulders. Now normally we have the “if it’s yellow, let it mellow.... if it’s brown, flush it down” type of mentality in our household. We’re having to change this practice now. I’m constantly reminding my oldest son (and my husband) to flush and put the lid down now. Marlie has some sort of unflushed-toilet-radar. Someone could have just gone to the bathroom minutes prior, and Marlie will find that toilet and splash around before I can get to her. I did catch her the other day, just as she was about to drop my husband’s new baseball cap in an unflushed toilet. I was able to snatch the cap from her just in time. Whew!