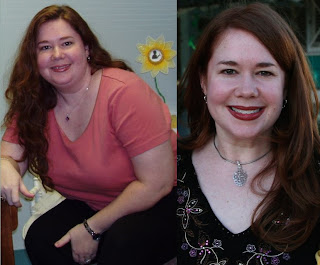 I was never heavy until I got pregnant with my oldest son. I had gestational diabetes while I was pregnant and gained 60 pounds. Lost almost 20 with delivery... and put it back on within a few months. (must have been the double stuff oreo-milk combination I discovered around that time) Add 7 miscarriages into the mix... and I put on another 10 pounds, totaling 70.

Fast forward to 2004... I was diagnosed with “Dysmetabolic Syndrome”, otherwise known as “Syndrome X”. It basically means I’m pre-diabetic, insulin-resistant and prone to heart attacks, strokes, etc. I was also informed by an Endocrinologist/Diabetes Specialist (AKA “Dad”) that with my metabolism disorder, it would be harder for me to lose weight than normal people and I’d have to exercise more than the average person in order to see results. I reacted with a “So why even try?” attitude. Why not have that extra Dr. Pepper.

Fast forward to 2005... At the ripe old age of 30, I was given the grim prognosis that I would have diabetes by the end of my 30’s and have a heart attack by age 50. People like me have heart attacks due to the inflammation of your heart, not due to 100% blockage. I took the VAP test, which in addition to giving me my horrible cholesterol results, also shed light on my current heart inflammation. My C-Reactive Protein (which is supposed to be less than 1.0) was 13.4. HELLO!

OK, so I needed to make a decision. I had to make a change, or I would die a premature death from this. I decided I would do whatever it took to be around long term for my kids. I joined a medically supervised weight loss program, that actually had a specific “Metabolic Syndrome Treatment Plan”. It was absolute torture, but I exercised 45 min. to an hour 7 days/week and dropped to an 800 calorie/day diet. It took me 7 months, but I lost all 70 pounds. (which in case you are curious, took me from a size 18 to a size 8) My C-Reactive Protein is now 1.4. Not quite less than 1.0, but darn near close enough for me.

I transitioned to a more normal calorie intake, but continued with the 7 day/week exercise until August 2006, when we brought our daughter home from Ethiopia. At first the shock of adding our third child to the family, and not sleeping through the night was my excuse. I needed my sleep more than the exercise (or so I told myself). But here we are almost 8 months later and I still had not returned to my daily exercise. I’ve been eating too much fast food and drinking too much Dr. Pepper, and now I’ve added back 10 pounds. Something must be done now!

I dragged my (slightly larger) butt out of bed early this morning and did an hour on the treadmill. Whew, that was hard! Then I did one set of weights, though eventually will get back to doing 3 sets, 3 times/week. I’m going to seriously limit my fast food and Dr. Pepper intake, though I’m taking that one day at a time.

It was a little hard for me to post my fat picture on the internet, but truth be told... I need to keep reminding myself what will happen again if I don’t stay on top of it. In fact, I keep a picture of myself at my desk, that was taken two days before I started my weight loss program.
So here I am... accountable to the world (or at least the internet) to keep exercising and lose those 10 pounds.

On a side note: I finally did our taxes today after keeping the TurboTax box on my desk for the past three weeks. Must have been the exercise that gave me the drive I needed to finally get it done.
at 8:54 PM