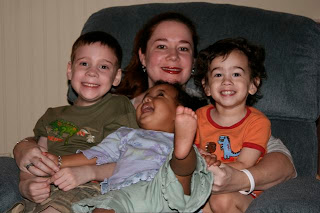 One of the most difficult times to be a mother of three young kids, is when they are sick. We have been having a lot of that lately, and I’ve definitely been earning my stripes.

It all began one Monday afternoon when Marlie started with vomiting and diarrhea. We had never seen her vomit before, so it was a bit scary. By the evening, we decided to take her to the ER, concerned she was getting dehydrated. My hubby took her while I stayed home with the other kids, since it was around bedtime for them. The ER doc decided she was not dehydrated enough for IV fluids, but instead gave her a suppository (Phenergan) to stop the vomiting. She had diarrhea 20 min. later, so she did not get the full dose. Then the doctor sent Marlie home with a prescription for more Phenergan suppositories. I followed up with my Pediatrician, who told me to NOT give the Phenergan to Marlie. There is a “black box warning” on Phenergan, that says you are never to give to children under 2, due to past infant deaths. At the time Marlie was 13 months old. I was pretty livid, that this ER doc would not only give this medication to my daughter, but he sent us home with a prescription for more. Her next, potentially fatal dose could have been administered by me, at home.

So I did the necessary complaining... I contacted the hospital administrator, the medical director and the California Board of Medicine. Though the medical director did not take me seriously, the administrator did, and after a couple of emails, he called and expressed his most sincere apology for the mistake, assuring me they would do everything they could to make sure this did not happen again. Now this is a very reputable hospital, where you would not expect this mistake to happen. Parents, you need to be on your toes and question everything when it comes to the treatment of your children! The latest figures to come out in Spring 2006 are: 195,000 people are killed each year (in-patient) by hospital errors. That is the equivalent to one jumbo jet crashing every day. My dad happens to be the medical director of a couple of hospitals, and teaches a 2 hour course on “Medical Mistakes”, so now he has more material to use in his talks.

So back to the spillage of various bodily fluids in my household.... The vomiting only lasted one day, but the diarrhea continued. And it was the worst diarrhea I had seen! We’re talking ALL over the place. Even the expensive diapers that I splurge on, could not keep that stuff contained! Well, one thing the ER did do right, is they took a sample of her diarrhea and tested it. Results came back a few days later. SALMONELLA. She came home with it from Ethiopia 6 months earlier, but didn’t have symptoms. A test a month later showed she was negative, so we thought she was in the clear, but apparently it was just laying dormant until now. The doctor who read her results ordered a antibiotic to treat it.

The following morning I heard my 2 year old son wake up and cheerfully call for me. I opened his door and was greeted by a horrific scene. Vomit EVERYWHERE. All over his crib, in his hair, all over his stuffed animals, on the bed skirt and on the floor next to his crib. My first thought... “Hey... I didn’t sign up for this today!” Oh, and he had diarrhea too. I’m thinking, “Great, he’s got salmonella too”. So I picked him up and stuck him in the bath. I figured he could sit in the bath for a few minutes to let some of the bodily fluids loosen up, before I cleaned him up. So I called my 7 year old to come and watch him while he was in the bath, so I could clean the carpet and start the laundry. “DON’T TOUCH SEAMUS OR THE WATER!” I said to him, thinking salmonella was everywhere. But my oldest son was so grossed out and refused to even stand in the bathroom with him, until I cleaned the vomit out of his hair. Ugh. So I cleaned Seamus up and then left him in the care of his older brother while I cleaned everything else up. I was rushing around trying to do the laundry, etc. as well as prepare the family room couch, by covering it with towels for when Seamus was out of the bath. Seamus was getting tired of sitting in the bath and started yelling, “All done with my bath, Mama” “All done with my bath, Mama”. I finished rushing around, got him out of the bath, dressed him and laid him down on the couch, just when I heard Marlie wake up. I went in to get her, and found that she had diarrhea up to her armpits (not kidding). So I took her to the kitchen to bathe her in the sink... all the while Seamus was calling for me and I had no idea if he was about to get sick again. Seamus did not vomit again, but his diarrhea continued, accompanied by a high fever, pneumonia-sounding cough and the largest export of snot I had seen to date. Each sneeze was accompanied by what seemed to be a water-balloon of snot exploding on his face. We had his poo tested, and thankfully he did NOT have the salmonella... just a poorly timed virus. Sorry to have been so graphic, but I like to share... so that means sharing all the juicy details. Hey, I’m a giving person, what can I say? Plus, the more I share... the more sympathy I get. I mean, really... how much sympathy would I have received if I just said the kids were sick and left it at that?

After 11 consecutive days of horrible diarrhea, lots of laundry and lots of baths, Marlie finally had a solid poo. I was so excited, I rushed to Instant Message my husband while he was at work. Funny how the consistency of poo can make your day when you are a parent. She had two days of normal poo before the diarrhea started again... but this time it was accompanied by a high fever, copious amounts of snot and a pneumonia-sounding cough. She caught Seamus’ virus!!! Ah... the joys of motherhood! Of course all of this happened at a time when my husband has been working crazy-long hours and weekends.

Now Seamus is better and Marlie is almost better... with just a little of the cough remaining.

I definitely deserve to celebrate Mother’s Day this year more than ever before.
at 8:24 PM