Three Is More Than Two 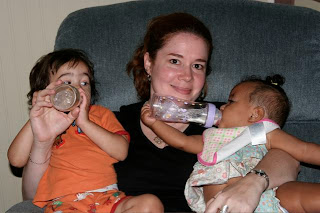 I still say the transition from “0” kids to “1” kid was the hardest. But three kids are definitely more than two! Three carseats... three hands to hold when I am out by myself with them. Wait a minute... I only have two hands. Crap! Ok... so the new rule is that whenever I am out by myself with all the kids, the two boys MUST hold hands with each other at all times, and then I hold the hand of one of the boys. I keep Marlie in my sling. It’s working... I always wear her as a hip child in my sling, Seamus is either in the shopping cart or in a stroller and Haven is by my side. Unless of course there is no stroller or shopping cart and then I enforce the hand-holding rule. Seamus’ Gymboree teacher told me today that he doesn’t remember me keeping either of the boys “this close” to me as I keep Marlie. Well... there was no need to! Keeping her strapped to me is the only way to keep her with me and have my hands free for Haven and Seamus. Yes I am still taking Seamus to Gymboree while Marlie is strapped to me. It makes the part where I have to bounce him up and down on my lap during song time a little difficult, but we are managing. I try to keep Seamus in my lap with one hand and my other hand is trying to keep Marlie from grabbing Seamus’ hair. Whew!

Poor Seamus. He was NOT ready to give up the baby position. He had a bit of adjustment in the beginning... not wanting to share “Mama”, but he is getting much better. He still gets a little cranky and wants me to himself when he wakes up from his afternoon nap, but other than that he is really starting to enjoy Marlie. Haven of course adores Marlie and has already declared that he wants “brown-skinned” babies when he is older. He says if his wife is not “brown-skinned” then he will adopt two babies from Ethiopia. He wants two “pinky/peachy-skinned” babies as well, that his wife will either have or he’ll adopt from the U.S. He’s got it all planned out. He obviously associates adopting light skinned babies from the US because we adopted his light skinned brother from the US. I asked why he wanted brown-skinned babies and he replied, “Because they are soooo cute!”. I can’t really argue with that. Speaking of Haven, his Sunday School teacher came up to me the other day. She told me something Haven said after we came home from Ethiopia with Marlie. He apparently had announced to the class that he had a new baby sister. One kid asked if he visited his new baby sister in the hospital. Without hesitation and very matter-of-factly, Haven replied, “No, we get our babies from Ethiopia!”.

My darling Haven. I could not handle the younger two without him. With just a year and 1/2 between them, I often feel like I have twins. Haven is so good with both of them. I am still homeschooling Haven. He’s in the 1st grade. I feel like a marathon teacher. The minute the younger two go down for their afternoon nap, it is time for school! We barrel through the lessons and usually finish up with 15 or so minutes to spare before the young ones wake up. Occasionally Marlie will wake up early and then I’m scrambling to finish while holding her or we postpone the rest of the lessons until the following day. It leaves me little, or actually no time to get anything else done. I’m trying to accept that this is a “season” and that everything else will be so much easier when my youngest is three years old. Thank goodness for the housecleaner that comes every other week to clean because otherwise it would not get done! But I’m not complaining! I’m busy and don’t really have any time to myself but I still feel like I’m the luckiest mom in the world. I have the three most beautiful children in the world (IMO), two of whom I can’t take any credit for. I have been blessed beyond measure.
at 7:47 PM